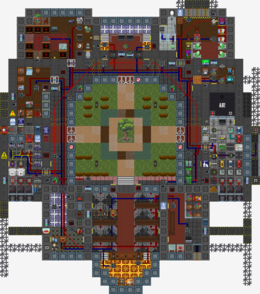 A picture of a Shepherd Class vessel donated by the Solar Orders.

Many religious groups develop a connection to their species respective homeworld as a location of divine significance. In many cases soil or other natural products originating from the planet are traded as valuable relics within the faith. The Shepherd-Class is constructed with a miniature biosphere containing soil imported from the human homeworld of Earth. Making it a ship of considerable spiritual value to religious sects within the Solar Confederacy, yet operates as an independent religious monetary.

The Shepherd is a specialized monastery ship designed for chaplain-styled gameplay. Featuring a centerpiece garden area that can be used for hydroponics and a large chapel area to the south. Many vital features such as the atmospherics, power, and medbay are rudimentary to encourage a focus on less advanced gameplay and roleplay interactions. Within the garden is a Sacred Oak which can be splashed with various reagents to give passive effects to anyone standing near it.

The Shepherd is designed for roleplay first. Starting with only the bare essentials for gameplay but plenty of features for player expression and Chaplain/Curator gameplay. A fully equipped hydroponics setup and basic equipment in the surgeons room allow for a more challenging chemistry experience that is further enhanced by the sacred oak resting within the garden. Overall the Shepherd offers a slower start but ample space to modify to fit any role over time.