From Shiptest Wiki
Jump to navigation Jump to search
Phorids 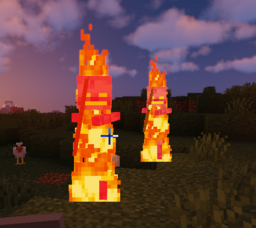 Phorids are a loose grouping (typically considered a sort of species) of people defined by being affected by any of several related conditions where plasma converts and overtakes organic matter. They're well known and loved for being violently difficult to keep alive in typical oxygenated atmospheres, given that they rapidly combust when they make contact with it. Typically, an individual phorid's "species" is more likely to be referred to by a name fusing "plasma" with the name of their original species, e.g., plasmaman, plasmarathi, plaskepori. Notably, people who experience phorid-conversion have no memories of their life prior to the event, retaining only things like knowledge and skills.

Plasma (the purple kind, not the state of matter, yeah we know), known by certain other names to science and complete nerds, sure can do a hell of a lot of things. As it turns out, one of these things is the total conversion of organic matter. Typically only harder matter is fully preserved, leading to most victims of phorid conversion looking more or less like what their skeleton looked like beforehand.

The conversion phenomenon is poorly understood, at least in part because attempting to replicate it in laboratory conditions is violently unsafe, unethical, and most importantly, so difficult to do on purpose that it's unprofitable to study. As a result, most that's known about the process is from studying accidental, naturally-occurring events. Phorid-conversion seems to happen (quite rarely) in an extremely broad range of events that more or less boil down to "extremely unsafe uses of plasma"- in the public eye, this is usually plasma fires, but fires are certainly not the only horrible thing you can do with plasma. Even so, it's still unlikely that these horrible things will do anything beyond kill their victims, as the incident rate of phorid-conversion is quite low. Extremely unsafe uses of plasma, however, are not, largely thanks to the research efforts of a certain Company.

Phorids near-always live a life highly tied to Nanotrasen (more so than everyone else, even). Prior to the end of the corporate wars, Nanotrasen had a particularly tight hold on most advanced uses of plasma, making them nearly the only source of things like safe, breathable canned plasma or decent plasma atmosphere environments. They were, however, also the primary source of phorids themselves, leaving them with a noteworthy number of contract-bound employees with a crippling new disability, no memories of their previous life, and yet all of their usable job skills, now stuck with an utter dependency on the company they work for in order to survive at all. Huh. Wonder if they did anything with that?

After the end of the war, though, things seem to be picking up, with availability of plasma-derived products increasing, and more independent efforts at increasing the quality of life for phorids showing up every day.

So you're a funny purple skeleton (or bugshell, or... whatever hard-tissue elzuosa have, or whatever)! This means that you live a life defined largely by your exotic sci-fi disability, a past life you don't remember, and being extremely spoopy and scary skeltal.

Phorids may or may not know what their name was prior to their conversion event, depending on the details surrounding it (how identifiable are the bodies?). Even then, it's not unheard of to not consider oneself the same person afterwards.

In cases where a newly-created phorid cannot be connected to their previous life, Nanotrasen uses a certain familiar naming scheme format, of [Element/Chemical/Whatever] [Roman Numeral].

There might be something that personally appeals to you about traversing an area destroyed beyond its old self by simple corporate greed. Additionally, you might prefer the do-it-yourself approach life on the rim has for obtaining plasma.