From Shiptest Wiki
Jump to navigation Jump to search
Vox 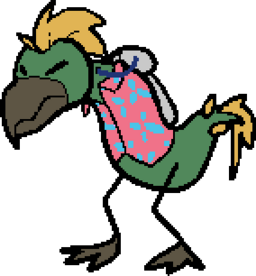 Vox have no colonies of their own to speak of. Most Vox originate from a location known as the Shoal, a sprawling, labyrinth-like space megalith of debris and asteroids fused together over countless orbits. It is there where their cutthroat and opportunistic behavior stems from. Little is known of Vox history itself, as the Vox do not keep many records beyond personal accomplishments and tales of profit and triumph. They have lived among the Shoal and the stars as long as they or anyone else can remember. It is possible the species went through a dark age before being introduced to the greater galactic community. Those taken by Vox raiders are rumored to be taken back to the Shoal to be sold as slaves. Other rumors speculate those not cut out to be slaves are sold by fleshpeddlers for “extraction”.

Playing as a Vox[edit | edit source]

Vox are somewhat prone to overheating under their layers of shaggy feathers and keratin spines, and many must take heavy accommodating measures to feel comfortable in a human environment.

Due to the nebulous and often exaggerated records of Vox history. There are many misconceptions about Vox culture spread by naïve scholars and Vox themselves. The following is a list of common misconceptions and what is understood to be the truth of the matter:

Vox vary in how how well they are able to speak common. Poor common is commonplace among most Vox, but those who work with other races frequently will have a more coherent grasp on the language. While common was designed to be as easy to learn as possible for a wide variety of races, it is especially hostile to those of spacer tongues and well developed pidgins. Vox pidgin is no exception to this, and even those with a solid grasp on common will ultimately face incredible difficulty in appearing to be native speakers.

Some common “vox”isms frequently observed in vox speaking common include:

“Khmm... you are not a smart one, are you?”
“Keh. I will do it.”
“Henry is doing job? Kreh, Henry is fast as shellbug. He will die gun death.”
“Khuhu, oh, that is very amusing. Perhaps you have something else to report, khu?”
“PIGGENE BUGHUMAN! I SWALLOW YOUR WEAK LIFE IN MY CLAWS!”
“I’s sure she is liking you. She is showed gratitude teeth-snarl.”

Vox generally use indigenous names which often prove hard to write. These names are often enunciated as a series of screeching sounds which are then transcribed into the phonetic equivalents in the Galactic Common alphabet, for example “Kikiriachiki”. By and large Vox prefer to keep these phonetic equivalents rather than adopting the naming conventions of other species.

Many Vox have grown fond of life among the stars, and typically avoid living on planetary colonies. They have a penchant for capitalism and goods peddling, deep space salvage, and sometimes interstellar crime. Many Vox now seek their fortune on the border of civilized space. Some trading with stations and worlds as (questionably legal) merchants, or applying to work for any one of the countless mega-corporations on the frontier. Other Vox (raiders) profit off crime and marauding, hijacking ships, cargo, and sometimes people to bring back to the Shoal.

Vox have their own language known as Pidgin. Pidgin is highly annoying to those who do not understand it and mostly consists of horrific screeching sounds and repetitive skrawks. Vox have sharp beaks and talons, and thus do increased damage when biting and kicking (when they have no shoes on). These kicks can puncture internal organs if their victim lacks any chest armor. Vox can withstand the cold of the vacuum better and for longer. Vox are allergic to several common human medicines, making treating them a challenge. Vox are somewhat prone to overheating under their layers of shaggy feathers and keratin spines, and many must take heavy accommodating measures to feel comfortable in a human environment. Vox are often seen carrying heavy, burdensome environmental regulators that must be worn on the back slot or on the suit slot (only fits in space suits, similar to nitrogen tanks). For this reason, when employed on primarily human stations, many Vox are provided with an environmental suit.