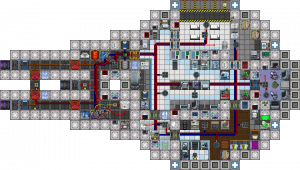 A real sight for sore eyes.

This ship is of historical importance, being one of the first ship "classes" to be constructed in large numbers. Most Box-class vessels in service today are updated versions with a more modern layout and advanced medical equipment.

The Box-class Hospital Ship is well-known for its long period of service, specializing heavily into rendering medical aid. A typical vessel is equipped with some of the most advanced medical equipment that can be supplied, including a full cryogenic therapy set-up, with some seeing service in war-torn and developing regions to render medical aid across a star system quickly and effectively.

This advanced medical equipment comes at the expense of personal defense weaponry and other facilities. On another note, high-end medical equipment and supplies can be sold for a truly incredible amount of money out in developing regions. Perhaps that's why those who can afford to will always field escorts alongside the Box-class.

The Box-class is intended as a ship for those inclined towards medical roles. The most distinctive feature is the complete cryogenics set-up, which can be used to rapidly heal most wounds and treat genetic damage effectively. This, however, is far from the only piece of medical equipment the Box-class possesses: stasis beds, hyposprays, and an impressive stockpile of medical supplies firmly places modern revisions of the Box-class at the height of healing capability of any vessel. The Box-class is poorly equipped in most other areas; mining capabilities consist of a single pickaxe with an unconstructed ORM, and the vessel is supplied with a single miniaturized energy pistol for self-defense.

The roles that can be selected aboard the Box-class are as follows:

The crew of the Box-class are best equipped for rendering medical aid to those who need it, whether it's healing your own crew after scuffles or rushing the battered crew of another vessel onto yours. The holopad on the bridge can be used to contact other ships directly; use this to inform people that you are willing to give help wherever it's needed (there is no wideband on the ship yet, this is a mapper oversight). Keep in mind that your vessel is ill-equipped for combat and a prime target for pirates, so be careful with who you decide to meet with.