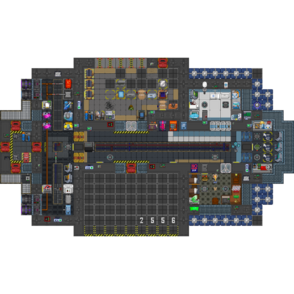 An earlier product produced by Nanotrasen shipyards, the Dwayne-class was originally a dedicated shuttle carrier intended as a replacement for expensive planet or asteroid-side mining installations. However, due to the project running into endless logistics issues their companion blue-space shuttles never got delivered. Looking to salvage what they could from the large number of hulls they had ready Nanotransen sold the vast majority of these hulls to the civilian market where enterprising captains quickly converted them into small mining ships with generous cargo bays. It is often said on the frontier that you can identify a captain by his Dwayne as no two ships look alike.

The Dwayne class is a good generalist ship designed around mining. It comes with an equipped med-bay and a LOT of space to work with. It is also notable as one of the few ships that are pretty much self-sufficient off the bat coming with a fully functioning solar array and external airlocks off both sides and back allowing the Dwayne to easily access deposits around it wherever it lands, this in combination with the ships free space for loot and building makes the Dwayne both a miners and engineers dream.

The roles that can be selected aboard the Osprey-class are as follows:

The Dwayne is a good starter ship as it starts off with a powerful solar grid and extra generators. This means you can take it easy at the start and pursue whatever goals you like. However past your initial material gathering you may run into a wall with your progression due to your lack of RnD so it may be worth keeping an eye on wideband to see if you can trade your material bounty for some initial research and components.