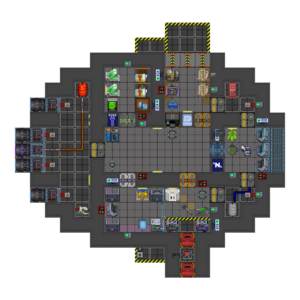 Kinda looks like an Egg more than a bubble, but who cares.

The Bubble-class Colonial Ship is a simple shuttle with "frugal" accommodations for its crew. Its cost efficient design has allowed it to see use by many different groups.

The Bubble-class is Nanotrasen's second ship design that made it to the civilian market. Its launch coincided with the start of Nanotrasen's homesteading program which promised ownership of significant stretches of land, provided they lived on the land and improved or developed it in some way. The Bubble-class was advertised as a well-suited and affordable ship for the task, resulting in Bubble-classes being a best-seller and among the most widely manufactured ships in history.

The Corporate Wars saw to it that Nanotrasen's control over their colonial sectors was severed. Many homesteaders, instead of being granted the land they were promised, were forced to support a different cause. The abandoned husks of Bubble-class ships can still be seen dotting the landscapes of the frontier-turned-battlefield.

The Bubble-class' main feature is its research bay and low cost, however it is lacking in everything else. The Shuttle only has a Crew Quarters, Cargo Bay, Research Bay and Engine Maintenance. This ship is un-ideal for crews larger than ~4 Men.

A Crew Quarters equipped with two beds and two cryochambers.

A Cargo bay with 2 Exo-suit Containers and Mining Equipment.

A Bridge, with controls and a Hologram Projector.

This ship is best used for exploring, mining, and researching. Most of the functions on the ship aren't that good, so trying to find materials to make it better is ideal. Remember, that at the end of the day, this is a COLONY SHIP, so it would be wise to actually start a colony.