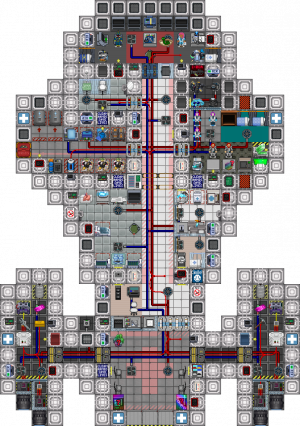 A real sight for sore eyes.

Named after a god of medicine known for his generosity, the Li Tieguai is designed to be able to quickly respond to medical emergencies. The hull's design is loosely derived from the Libertatia-class and follows similar design principles, making it one of the more lightweight and nimble vessels available.

Designers of the Li Tieguai-class thoroughly analyzed the Box-class vessel and its shortcomings, namely the near total lack of defense weapons, making voyages into dangerous regions risky at best. The Li Tieguai does not skimp out on armaments, with the standard model coming equipped with quality self-defense weaponry and less-than-lethal ammunition. This, along with an advanced set of medical equipment, makes the vessel popular for use in high-risk scenarios.

The Li Tieguai-class is intended as a ship for those inclined towards medical roles. It shares similarities with the Box-class in nature, with both vessels being highly specialized towards rendering medical aid to those who need it. It has a highly capable infirmary, ample supplies, with notable deficiencies in mining capabilities, with the vessel lacking even an ORM board for use. However, unlike the Box-class, the Li Tieguai has a notable edge: an armory, with real guns and ammunition.

The roles that can be selected aboard the Box-class are as follows:

The crew of the Li Tieguai-class are best equipped for rendering medical aid to those who need it, whether it's healing your own crew after scuffles or rushing the battered crew of another vessel onto yours. The holopad on the bridge can be used to contact other ships directly; use this to inform people that you are willing to give help wherever it's needed. Keep in mind that your vessel is a prime target for pirates, so be careful with who you decide to meet with; your hardsuits are modestly armored and you are equipped with less-than-lethal weapons if it is needed.