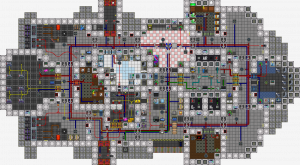 The Shetland-class General Purpose Large Frigate has become ubiquitous across the frontier thanks to its reliability and high modularity. A Shetland can be modified to fill virtually any role in a fleet setting. The stock Shetland features a good supply of equipment for general operations.

Supposed reports of crewmates "behaving uncharacteristically" and slaughtering other crewmates are blamed on alleged defects with the on-board atmospherics mixing and filtration system, which so far have remained unsubstantiated.

The Shetland's in-lore ubiquity is satisfyingly ludonarratively harmonic- you'll be seeing a lot of this map, due to it having just a bit of anything and everything. Highlights:

The crew that can be typically found aboard a Cricket-class are as follows: