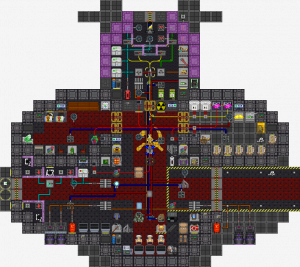 But if it did exist it would look like this.

As legend goes, the Kugelblitz-class is, allegedly, a small corvette with a rare and powerful Supermatter reactor powering it, allowing for nearly limitless freedom when it comes to ship weapons and equipment, given that the engineers on board are willing to push the engine to its limits. The ship's automated gas-recycling systems feed directly into four plasma engines, which let the Kugelblitz reach high top speeds with incredible maneuverability. In case of an emergency, the Supermatter is able to be loaded into and ejected out of the ship from a mass driver system; if the myth is to be believed, this has been weaponized on multiple occasions, with devastating results.

Thank Space Jesus that such a vessel doesn't exist.

The Kugelblitz is built by and for those experienced with or interested in engineering and construction. The ship is unique from other pre-mapped ships in that it contains at start a supermatter shard and the setup to accommodate it, meaning that if you don't dust yourself or blow it up outright, you'll never, ever run out of power. Despite this, the ship is one of the few to not have any electrically-powered ion thrusters, meaning that all of your surplus electricity cannot be used for navigating space. Instead, all of its thrusters are plasma gas-fueled, and at roundstart you have both the standard pressure tanks of plasma and a setup to collect waste plasma from the supermatter engine. If you somehow run out of plasma even in spite of this, you have ample tools for supplying yourself with more, should any exist at all anyways.