Marketed as "the logical conclusion of the food truck's evolution", the Boyardee-class Entertainment Vessel is generally a welcome sight for weary space travelers. The ship class takes its name from a legendary chef of Solarian folklore who was said to have kept all of Earth fed in the months following the Night of Fire. Unlike many other classes of ship, the Boyardee picks one role - providing food and drink - and does it very well, at the expense of just about all other areas. 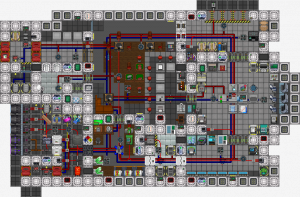 Everybody loves seeing these but nobody wants to pilot them...

Still, it's not like it needs all the other fancy stuff other ships get. It's just an entertainment vessel, after all.

The Boyardee's main features consist of its full bar, kitchen, and botanical garden. The bar, or Canteen as it's called, features all the equipment you would find in a station bar! The kitchen meanwhile also serves as the bridge. On the bridge, you can also find the clothing vendors for chefs and bartenders, as well as a dinnerware vendor. Although the kitchen comes pre-stocked with flour, milk, eggs, sugar, rice, universal enzyme, and meat in the walk-in fridge next to botany, these resources will quickly run out. Thankfully, botany is right next to the kitchen, and comes stocked with a Megaseed Servitor in the Crew Quarters. While it is technically possible for whomever is doing botany to create crazy plants that do utterly deranged things, it's recommended that they focus their efforts towards keeping the kitchen stocked. Not just from growing fruits and vegetables, but also via stocking the Biogenerator and using it to produce milk and monkey cubes. While you can't do much with gathered materials, it does feature a set of rather good mining equipment, which you could use to sell materials to patrons on the side for more money.

The crew that can be typically found aboard a Boyardee-class are as follows:

Look for people! At its core, this ship is one that's made for crews of other ships to visit and have a good time. As mentioned, you possess a wideband relay on the table in the bridge that you can use to broadcast your location. As for resource gathering, it's recommended that you focus on gathering plasma, as that is what fuels your engine. Iron, titanium, and glass are also good to have for maintenance, but all other resources will see limited use outside of trading.