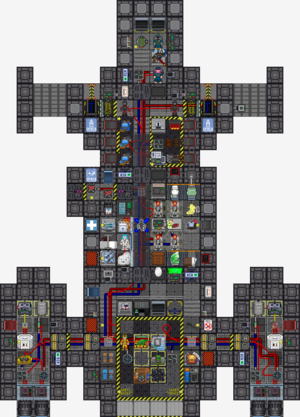 A Libertatia-class Hauler in its typical configuration.

The Libertatia is an exceedingly cheap cargo shuttle produced by Miskilamo Spacefaring, and one of their most widely-produced classes: Small, fast, and short-ranged, ostensibly designed for short runs of high value cargo. in actuality, serious shipping operations rarely use them because of their terrible reliability. their small size and extreme maneuverability combined with their low cost have, however, made them the first ship of a great many smugglers and of pirates with more ambition than resources, who often retrofit the civilian edition's cargo catapults into dedicated torpedo launchers... often carrying a payload of cutthroats. The sight of a Libertatia, regardless of whether the skull and bones is painted across its hull, is usually enough to make frontier crews immediately reach for their weapons.

Libertatia-class vessels are typically seen as pirate vessels or cargo ships. The ship comes standard with several shotguns, giving crewmembers high damage output. The ship also comes equipped with a basic medical bay, allowing the ship's doctor to treat anyone injured during combat or exploration. However, the ship is completely lacking any R&D equipment or autolathes, meaning crews will have to acquire that equipment elsewhere.

The roles that can be selected aboard the Libertatia-class are as follows:

This ship is best equipped for combat and mining. As such, this ship is typically a fit for aggressive crews. Its lack of an express supply console means you can't easily spend that hard-earned money, but you may be able to trade for one from a ship with functioning R&D.