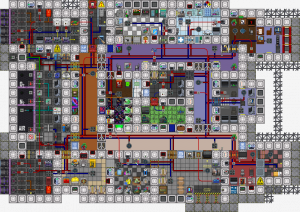 Named after a common earthly insect known for it's distinctive chirping, the Cricket-class is specialized in communicating at distances often reserved for orbital stations or substantially larger cruise vessels. Original prototypes of the Cricket were designed as an independent radio broadcasting shuttle, with ample accommodations for inter-planetary travel. The model never saw mass production until its adoption by the Solar Governance and placed into service as a scouting vessel. An over-engineered telecommunications rig turned into a boon as the Cricket became one of the few inter-planetary shuttles capable of encrypted radio communications across multiple solar systems. Well rounded facilities and an onboard telecommunications system made the cricket-class a hallmark in the Solar Governance's ability to coordinate and enforce its influence across an ever-expanding universe.

The Cricket-class is a generalist ship with a functional telecommunications rig, allowing for the use of radio headsets without any delay, and if configured properly, encrypted channels that nearby ships will be unable to eavesdrop on. As such it can be used to fulfill any role it needs to be it a planetary enforcer or an explorative researcher. The in-built atmospherics are large enough to recover from breaches, with portable pumps and scrubbers for any emergency. A comfortably-spaced storeroom for additional supplies can be found within the cargo facility, complete with equipment for planetary exploration. The onboard canteen well supplied to prepare any meal from whatever can be found along the way. Medical staff will find the infirmary plentifully stocked with various chemicals to be prepared as needed for any situation. While SolGov officials can be comfortably accommodated within the onboard office space and bridge.

The crew that can be typically found aboard a Cricket-class are as follows:

The cricket is a ship with a very strong generalist load-out. It comes fully equipped with most departments including supply and RnD and one of the few vessels with chemistry from the start can make this a great ship for beginners or those looking for a particular gimmick. Other than initially setting up your RnD and power generation your free to pursue your own long-term goals without further considerations for this vessel.