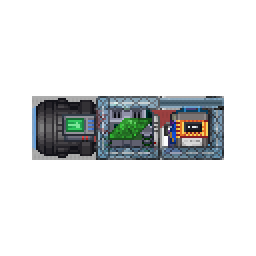 Lord help you if you wake up on this thing.

The "Pill-Class", commonly called a Torture Device, is the absolute bare minimum of what would constitute a spacecraft. Often created by prisoners desperate to escape confinement, odds of survival within these crafts is minimal.

Still, there have been a fair few who have managed to survive and modify their "Pill" into something quite a bit more space worthy. Either that or the prisoners get picked up by a sympathetic crew. Better than dying to a goliath you landed right next to.

Why is it gone?[edit | edit source]

The Pill was removed for being a joke ship that was never meant to be buyable. Coupled with the fact that pill players tend to be on the lower end of the RP spectrum, how it encourages not interacting with other ships, and how a growing percentage of the playerbase disliked the pill, was removed on January 16, 2022. It is still admin spawnable to be used as it's intended purpose as a punishment ship.

Owing to its extremely minimalist design, this ship only costs 50 Cointests. Despite said minimalistic design, it's not as if you're left with nothing. Included in the pill is just about everything you'll need in order to survive and expand. These items are:

The crew aboard this incredibly cramped ship is, at max, comprised of:

A unique thing about prisoners: the suit sensors for their jumpsuits will always be maxed out. Handy for medics trying to find you.

Accept that this is essentially Spaceman Must Die difficulty. Your chances of survival are very slim, as all it takes is landing next to a goliath to spell doom for you.

With that said, you can pilot this like a usual all-rounder ship. Due to its tiny size, the pill can travel at incredibly fast speeds. Careful you don't run into an asteroid field however, as that'll cause instant destruction. If you can get lucky and acquire resources without dying horribly, you should first try to expand the pill and set up the autolathe. No Ore Redemption Machine means you'll need to use ghetto methods of material refinement, such as using the Experimental Welding Tool on ores. Taking a flame to plasma isn't exactly a good idea, so the other method is to insert ores into the autolathe. When you do so, they're refined, but inaccessible. That is, unless you deconstruct the autolathe in order to get at them. It's not convenient but hey, you decided to play on hardmode. Expand your pill into something better, try not to die horribly, or just hope another crew decides to take you in. Fly on, you damn madman/madwoman.

One more thing: TURN OFF YOUR GENERATOR AFTER YOU LAND. YOU ONLY HAVE 5 SHEETS TO POWER IT WITH AT THE START. DO NOT LET THEM GO TO WASTE.